So once upon a time, I decided I really, really, really wanted to write a story and have it published in either Alfred Hitchcock Mysery Magazine or Ellery Queen Mystery Magazine.  For those that aren’t aware, those are probably the two foremost print publications of mystery short fiction on the market and have been for a long, long time.

They can also be notoriously difficult to break into.

But I decided that I had a couple of novels under my belt and maybe, just maybe I could convince them to take a look at a piece of short crime fiction with my name on it.

So I set about creating a story about a cop in San Diego on the verge of retirement who just completely snaps and screws up his retirement in the blink of an eye.

I really liked the story when it was done and I felt pretty good when I sent it off to the magazines.

Alas, they did not feel the same way.  I got a polite little rejection notice informing me that it was not to be.

So it sat on my computer without a home.  For several years.  Until I decided to publish OUT OF TIME.

And here’s why I decided to include it with the other four stories:  I always thought it was a good story.  I liked the way things spiral out of control for the guy.  The way it just gets worse by the moment.  The way a life can change in an instant.  I thought all of those things came across pretty well in the story and it was different from anything that I’d ever written before.  It felt like I’d taken on a challenge…and passed it.

So even though the magazines didn’t think it was right for them, I always felt it had life.

And now it does. 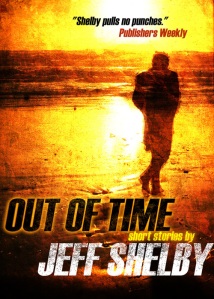 One thought on “The Story Behind The Story – JACKED UP”