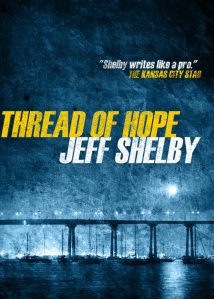 You might wanna grab a little more coffee and something to eat because this is gonna be kinda long.  Maybe tell your friends you’re gonna be tied up for awhile.

So over the holidays I published my novel THREAD OF HOPE over at Amazon through their Kindle Direct Publishing program.  This was a novel that had been shopped around with traditional publishers for awhile and despite some near misses, we came up empty in finding a home for it.  It was languishing in my computer, whining at me every day DO SOMETHING WITH ME PLEASE, I’M BORED.  So I finally listened.

I had listened to the success some other author friends had with publishing electronically, but I admit – I didn’t pay too much attention.  I’ve had too many other things going on in my life to really dig into the shifting publishing landscape and get a firm grasp on it.

But there were three things I consistently heard:

I figured that I had nothing to lose.  I knew the book was polished.  I knew that traditional publishing doesn’t always know what sells.  I knew I had a small group of people who were familiar with my name because of the other books I’d published.  I knew that I could handle it if not a single soul was interested in the book because, well, I’ve known that feeling during different times in my career as a writer.

So it went live on Amazon on December 31st.

And promptly didn’t do much of anything.

Sure, my family and friends grabbed a copy and a random copy or two would sell each day.  But it did nothing to set the world on fire.

Which was actually fine because I had no expectations for the book.  I was just testing the waters, learning about epublishing and this brave new world.

When I published the book, I signed up for the KDP Select program, which most have probably already heard too much about.  Long story short – the book can be loaned if you’re an Amazon Prime member and, as the author, I could give the book away for free for a few days if I wanted.

Now, I’m not here to debate the merits of giving one’s work away for free.  I know all of the arguments and I can make a case for either side.  But for this book, because I didn’t have any expectations and because I simply wanted to get the word out, I decided I would give the book away for free on February 6th and 7th.

When I woke up Monday morning, it was already flying.  I think the most I’d sold in any one day prior to that day was six.

When I woke up that day at about 5:30am, it had already been downloaded 287 times in the approximately three and a half hours it had been available for free.

And I could hear it whistling at is flew up the free bestseller list.

I admit – “free bestseller” is an oxymoron.  It’s not selling.  It’s giving.  But seeing it climb any list that has “bestseller” in the title is always going to be welcome.

I had done some planning ahead, thanks to the smart folks over at the Kindle Boards, and contacted several of the big ereader sites that notify their followers and readers about free Kindle books. Ereader News Today picked it up first and let people know that morning.

And then Pixel of Ink – the Holy Grail of ebook news – let their readers and followers know about it in their midday post.

And it was gasoline on the fire in the best of ways.  A tiny spark raged into an inferno.

At 9:47pm on Monday night, I checked Amazon.

THREAD OF HOPE was the most downloaded book in all of Amazon land.  Not in mysteries.  Not in fiction.  But in all books.  Number Freaking One. 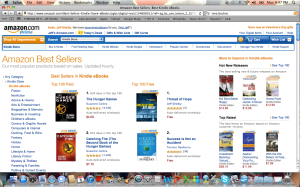 I don’t recall the exact number, but THREAD OF HOPE had been downloaded somewhere in the neighborhood of 28,000 times.

And it parked itself there for all of Tuesday.  I did not track the numbers exactly but it was somewhere around 40,000 downloads when it went back to paid in the middle of the night between Tuesday and Wednesday.

The aforementioned friends – particularly Anthony Neil Smith and Victor Gischler – assured me that the success the book experienced while being free would carry over into the paid sales column.

I had expanded my readership and, more importantly, Amazon was now aware of me.

The paid sales were immediate.

And it slowly started to climbed the bestseller list.

And this time it was actually selling.

It moved steadily on Wednesday and Thursday, hitting different milestones along the way.  Top 100 for all books.  Top 10 in mystery.

To say I was freaking out would be a bit of an understatement.  But you have to understand.  My career had come to a screeching halt for several years before getting jumpstarted again in 2011.  And even after the jumpstart, I knew my audience was still small.  In a matter of several days, I was gaining more exposure – and financial success – than I’d ever had.  Seeing my name up there with Janet Evanovich and Stieg Larsson was strange and odd and fantastic and a million other things.

On Friday morning, when I woke up, it was at #4 on the mystery list, right behind the three Larsson books which had been entrenched on the bestseller list for, like, three years.  That isn’t an exaggeration.  Three years.

I was giddy.  I think it was #25 overall – something like that.  I honestly can’t recall all of the details.

In approximately 110 hours, it went from complete obscurity to the bestselling book in the mystery genre at Amazon.

I was shocked.  My students came into my room and I was a stuttering mess because I couldn’t focus, couldn’t concentrate.

I think it was there for about twelve hours before Larsson retook his spot atop the mountaintop.

And it has continued to sell.

A week later.  So there’s been some staying power.  And, um, a fair amount of money.

How did it happen?

I’m not really sure – I don’t think you can ever be sure – but here are some things that I think contributed:

1.  Planning.  Making sure that people knew it was going to be free was key.  My networks only reach so far.  When other places picked it up and told their networks, it had a snowball effect.  Once it got up on the lists, people found it easily.

2.  The cover.  JT Lindroos did the cover for THREAD OF HOPE (Neil pointed me in his direction) and it’s fantastic.  In a sea of book covers, I think he nailed it and I think it looks fantastic. And covers matter to people buying ebooks.

3. At the risk of sounding like a jerk…it’s a good book.  I spent a ton of time on it and it was vetted by a number of people who helped make it better.  It’s polished and clean.  I think the reviews that I’ve garnered in the last two weeks confirm that.

4.  Luck.  Because big numbers require a little luck.  Where it came from, I’ll never know.

6.  The writing community.  Nearly every writer I know will do anything they can to help out another writer. When the book hit and I started sending out the info, other writers sent out tweets and posted it on Facebook and told everyone they knew.  It’s what writers do.  They don’t just write.  They support.  Because they know what it’s like.

There are probably about a hundred other things that contributed, but those are the first reasons that come to mind.

So now what?  What’s the fallout?

I have a lot to think about.

But I am writing.  The second Joe book.  The fourth Noah book.  A collection of short stories featuring Joe and Noah.  With a fabulous cover that J.T. has done.  Which I’ll be unveiling here tomorrow.  With a release date for the shorts.  A very, very near release date.